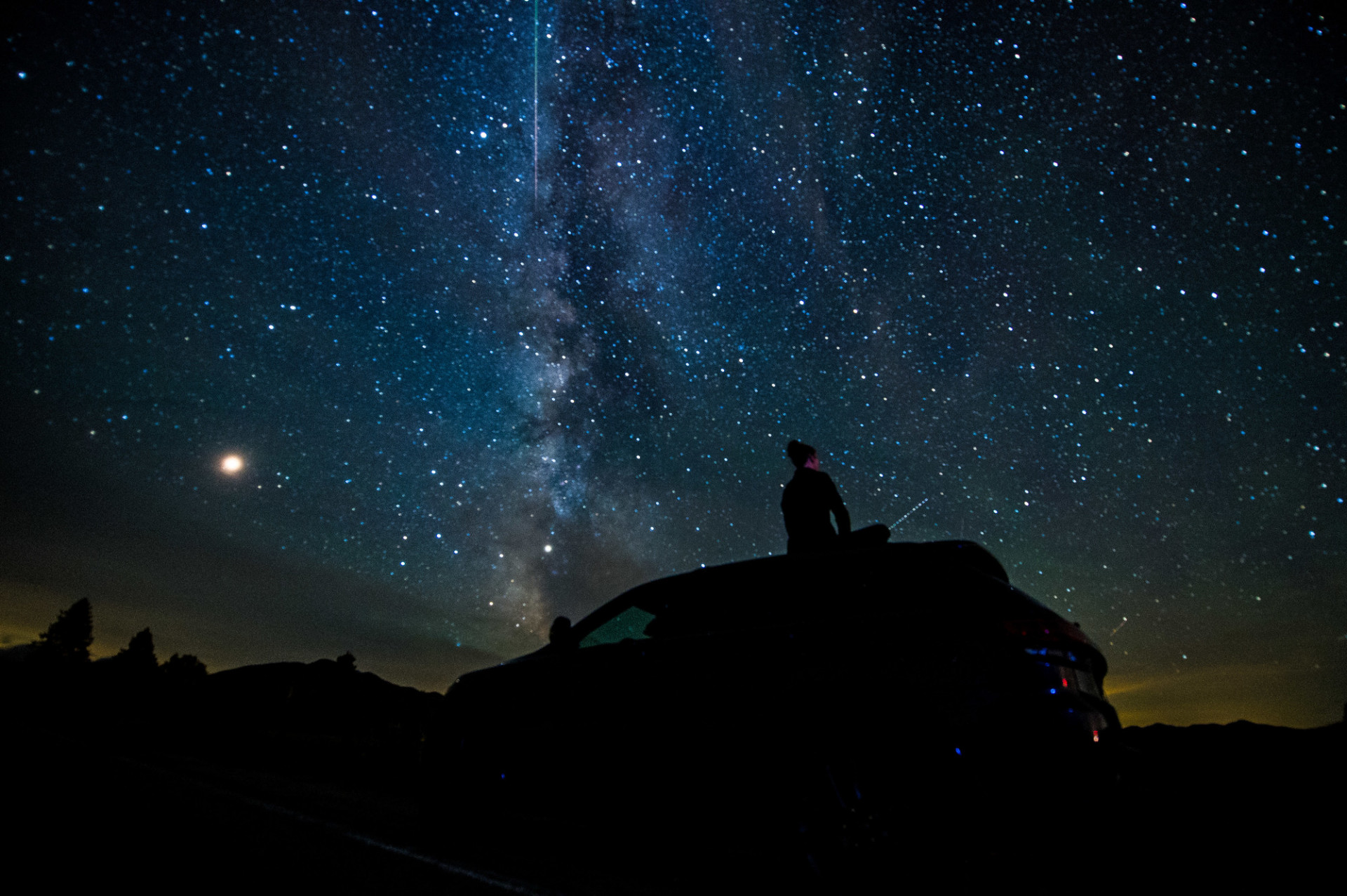 Growing up, how many of us made a wish on a falling star? The experience of seeing a bright, glimmering spark streaking across the night sky is a delight that fills one with wonder. Whether our wishes come true or not, nature has given us a lovely, memorable gift. Now what if I told you that the gleaming, glowing spark that you see is just a bunch of hot air and a rock? I swear I'm not kidding. This is the amazing true story of a meteor, and how you can enjoy an upcoming meteor shower with your very own eyes in the awesome dark skies of Tupper Lake.

What is a meteor shower?

Simply put, a meteor shower is what happens when Earth, traveling on its course around the sun, encounters a cloud of rocks and dust particles in a variety of sizes and those objects enter our atmosphere and put on a good show. Dust doesn't sound too exciting, but there is more to it than that and it's pretty awesome.

Bits of dust and rock in space are called meteoroids. When a meteoroid hits the Earth’s atmosphere, friction between the atmosphere and the meteoroid — even if it’s super tiny — causes the air around the rock to heat up. That blazing streak you see in the night sky is the incandescent path of the meteor as it descends into the atmosphere, heating up the air it travels through. As meteors travel through the atmosphere, our perspective on earth makes it look like a star is falling out of the sky and when there are a lot of them, we feel like we're being showered by them.

By now you may be thinking, okay that's cool, but you still haven’t explained the shower! I promise I’m getting there and it’s good stuff. A meteor shower is what you get when there’s a cloud or cluster of meteoroids that enter Earth's atmosphere and put on this hot, bright show together, for hours or even days.

The majority of clusters of meteoroids that create meteor showers are made by comets. Comets are often called “dirty snowballs” because they are made up of a mix of ice, rock, dust, and frozen gases. They’re a bit messy and the closer they get to the sun and the Earth, the messier they get. Just like us, there are a number of comets that orbit the sun; most of them simply take a really, really long time to do so. We're talking hundreds of years, with elliptical orbits stretching far beyond the outer planets. Despite that, they make their presence felt more frequently, through meteor showers.

The closer to the sun a comet gets, the warmer it becomes, thanks to the heat of the sun and solar wind. As it warms, the ice begins to melt, dust and rock are set free, gases begin to be released, and the comet grows a bright tail. The tail is visible because all of that dust, rock, and bits of ice reflect sunlight; it's an amazing show and a great example of how interconnected nature is. As the comet moves, some of that dust and rock is left behind and, if the geometry lines up, the Earth eventually moves through that cloud of left-behind debris. The meteoroids encounter our atmosphere, creating a meteor shower.

Think of it like this: you and I are both hiking on paths that intersect. I start throwing flower petals on the path as I hike, leaving a trail of them behind me, throwing more the closer I get to the summit. At some point you will get to the spot where the paths meet and you'll encounter my flower petals. You're the Earth and I'm the comet, leaving my mess all over the solar system, especially close to the sun (Do NOT do this for real, please; remember to Leave No Trace).

Every April, stargazers and casual observers are treated to the Lyrid meteor shower, the oldest recorded meteor shower in the world. Meteor showers are named after the constellation they appear to originate from, in this case the constellation Lyra. The source of the shower is particles of dust from a long-period comet, Comet C/1861 G1 Thatcher, which takes an amazing 415 years to complete one orbit of the sun.

Thanks to a lack of light pollution, Tupper Lake is a really wonderful place to stargaze and of course that includes meteor showers! Viewing a meteor shower is an excellent activity for date night, families with inquisitive kids, and anyone who wants to enjoy nature. While it might be chilly out, this shower is well worth bundling up and spending a bit of time outside. This year, the shower will be visible — weather permitting — April 16-25, although it will peak on the night of April 21-22. That's the best night to see the most meteors.

Although Lyra is a relatively small constellation, it contains Vega, the fifth-brightest star in our night sky. This brightness helps stargazers quickly find it in the night sky with some simple directions. Lyra will appear in the northeast, rising in the sky through the night. The chart below shows Lyra's location in the sky at midnight on April 22.

Where to watch and other tips

Anytime you want to do some stargazing, keep two things in mind: the darker the sky, the better, and you want an open horizon. In the Tupper Lake area, we have a few places we like for stargazing which should be good for this shower.

Little Wolf Beach is always a great place to stargaze, as it offers wide views and is easily accessible. The causeway on Route 30 south on the way out of town has a pull-off and the sky is wide-open. However, this location isn't great for children and you should be very careful of traffic, even if it is late at night. A great location, conveniently located right in town, is at the Municipal Park. There is ample parking, it's safe, and your view won't be obstructed. Because Tupper Lake loves stargazing, even in the middle of town there's not a lot of light pollution.

If you're feeling adventurous and you want to feel a tiny bit closer to the sky, hiking to the summit of Coney Mountain is the spot for you. With some of the best views in the area, Coney is a stargazing favorite. Because Adirondack weather is a little unpredictable in April, pack and wear layers, use a headlamp, and pack extra batteries.

No matter where you go, remember that the later in the night you go out, the higher in the sky the shower will be. Give yourself time to let your eyes adjust to the darkness; you'll see much more of the sky's sights that way. If you're interested in learning more about the constellations you'll be seeing, apps such as Sky Guide and Stellarium are great tools and have red light options that won't ruin your night vision. And don't forget to bundle up! Depending on where you go, you might want to bring a collapsible lawn chair and blankets, too.

Meteor showers are amazing to watch. They are also a neat opportunity to take photos of the night sky, although simply watching and experiencing the shower should be your first priority. You don't want to miss the show because you're fighting with your camera!

Thanks to the great dark skies, there are plenty of stargazers and astrophotographers of all levels of experience in the area. Many are involved with the Adirondack Sky Center & Observatory, a growing organization that runs a roll-off roof observatory near Little Wolf Beach. The Observatory also has an office, classrooms, and gift shop downtown. Be sure to stop in during the day to pick up souvenirs, guidebooks, and activities for stargazers of all ages. Even a quick visit will provide you with invaluable information about stargazing in the area! The observatory's Facebook page is also a great resource for astronomy news and events.

Whether you're a longtime stargazer or a first-timer, Tupper Lake is a beautiful, friendly place to get comfy and enjoy the show. Quality motels make for a great home away from home, and the local restaurants offer an array of dining options, including the important early morning, post-meteor shower breakfast! Tupper Lake also has excellent attractions for your daytime adventures, too! This is the adventure you've been looking for.