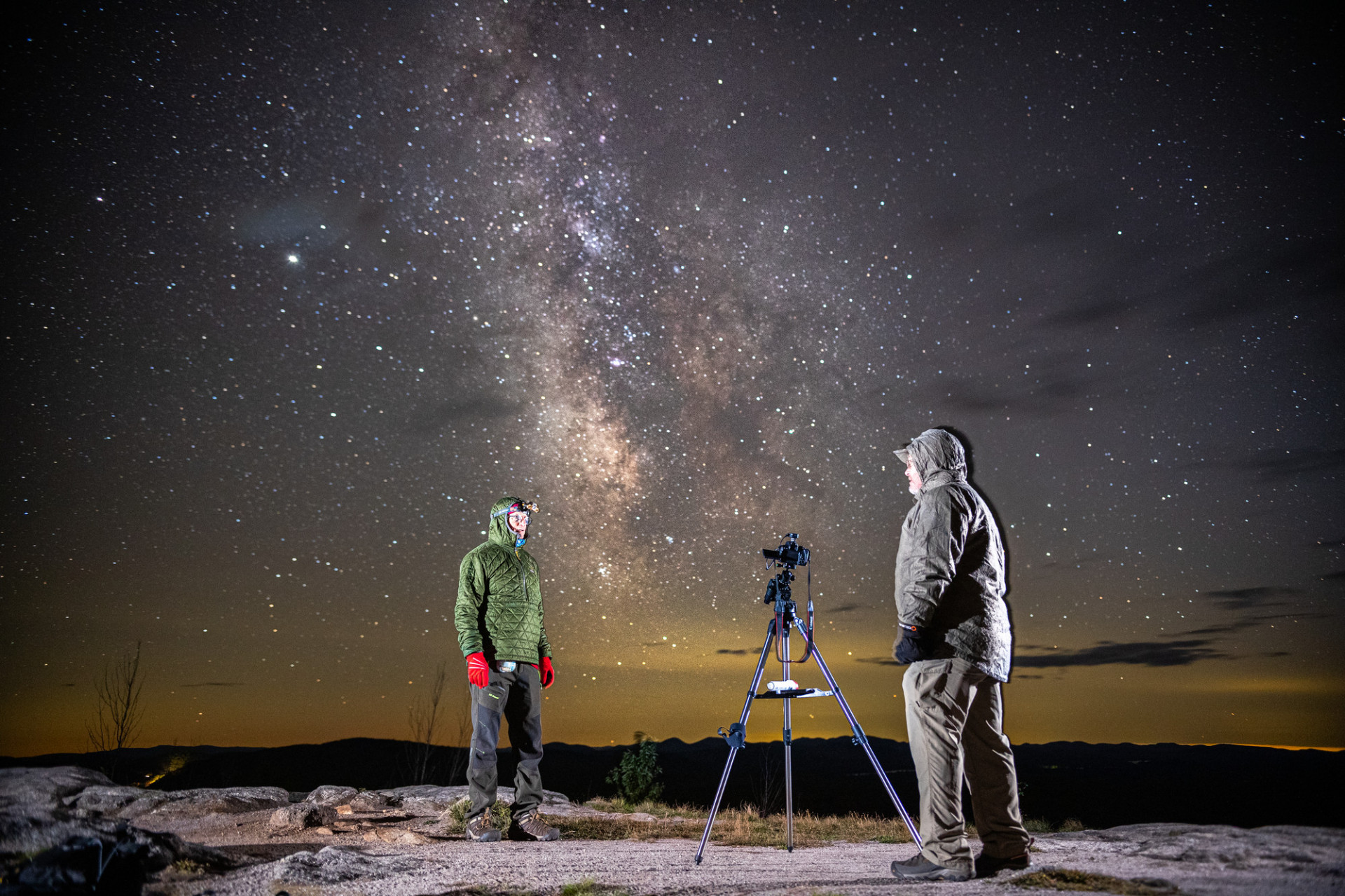 The Perfect Place to Stargaze

Take a look up at the night sky. It's full of amazing things: stars, planets, nebulae, whole galaxies that make our home seem like nothing more than a speck of dust. Whether you're an avid stargazer or you just like gazing with wonder at the vast expanse above, the Adirondacks is a wonderful place to get an awe-inspiring view. Tupper Lake, known for its dark skies, is home to Gordie Duval and Ted Merrihew, two longtime friends, stargazers, and astrophotographers. Eric Adsit, ROOST's intrepid photographer and videographer, recently spent time with Gordie and Ted to learn more about their favorite places to stargaze and what makes our skies so special.

Could you give me a sense of why Tupper Lake is the place for great night skies?

Gordie: The great thing about stargazing in the Adirondacks is the lack of light pollution. If you go to the urban or suburban areas of the major cities there’s so much light pollution you can’t even see the stars, let alone the planets and so on. So here, we have a great opportunity and we’re taking advantage of that opportunity, with the Adirondack Public Observatory project.

Where is one of your favorite places to stargaze around Tupper Lake?

Ted: Coney Mountain is really accessible for stargazing. It’s not a hard climb: it’s only one mile up, especially when you’re bringing up a lot of camera equipment. It’s a perfect place to stargaze. 360-degree view, nothing obstructing your view, it’s just beautiful.

What is it like to be on Coney, to watch the sun set, and then you see that first star, what kind of emotion does that bring to you?

Ted: Observing a sunset is just a spectacular view. You never see the same sunset. We’ve been up there many times where you see the spectacular sun setting and as it goes down and you’re just waiting for those first few stars to start popping. With the naked eye there’s still the blue sky but you start seeing the stars popping and as you’re out up there, waiting, as the brightness of sunset turns to darkness, the sky just explodes with the Milky Way, if it’s a clear night. Many, many stars...it’s an unbelievable sky.

When did you first get interested in taking photos of the stars?

Ted: I first began taking photos of the stars — actually, probably I took my first shot in about, I think it was 1985. I just set my camera up outside in the yard and just opened up the shutter for about a half hour and sent it out in the mail because that was 35mm back then, and when it came back I had all these long streaks in the sky, so I got the idea, thinking, ‘Wow this is pretty neat.’ But I really got into with Gordie: Gordie had an observatory right at his house, so on some nights we’d go down there and I’d bring my camera, we’d hook it up to the telescope. It takes a lot of time to get a decent photo, whether you’re guessing, you’re trying to do different time lapses, setting different settings on your camera, so that’s when I first started with Gordie. And then we moved on to going up Coney.

What is one of your favorite things about photographing the night sky?

Ted: Well, one of my favorite things is actually seeing the finished product. It’s so hard to see what it’s going to be like. We can see it by our eyes, the gorgeous stars up there, the massive number of stars up there, but it’s looking at a little screen, wondering what kind of a shot you got, waiting until you get home, to download to see what kind of photos you have.

What is your background in astronomy and what do you think about the legacy of astronomy?

Gordie: Astronomy really started for me when I was about 5 years old, sitting out in front of my house, looking up at the night sky, hoping to get a glimpse of something moving, which back then I think Sputnik was the only thing, but we...when I look at astronomy, historically, it’s always been a big question mark in everybody’s mind. You know, ‘What’s up there?’ ‘What’s out there?’ ‘How far does it go?’ There’s so many questions that come when you look up at the night sky and I think that is the driving force is that quest for knowledge and there’s just so much of it out there you know, for the taking.

What would you say to someone who’s interested in stargazing on a mountain, but has some reservations about maybe hiking out in the dark?

Ted: I would encourage folks to try it, making sure that they had the proper equipment. Headlamp, warm gear, and just try it for the first time. Even if it’s just a sunset, you can still get down probably ¾ of the mountain without your headlamp, right after the sun goes down. To continue on, to stay up there, to just see all the stars pop, and the constellations and the Milky Way come out; try, have the right equipment, and you won’t be sorry you did.

To learn more about stargazing in the Adirondacks, explore the offerings of the Adirondack Sky Center & Observatory, which provides awesome educational resources to the public about the world around us. To explore Tupper Lake's dark skies, plan your next visit today!