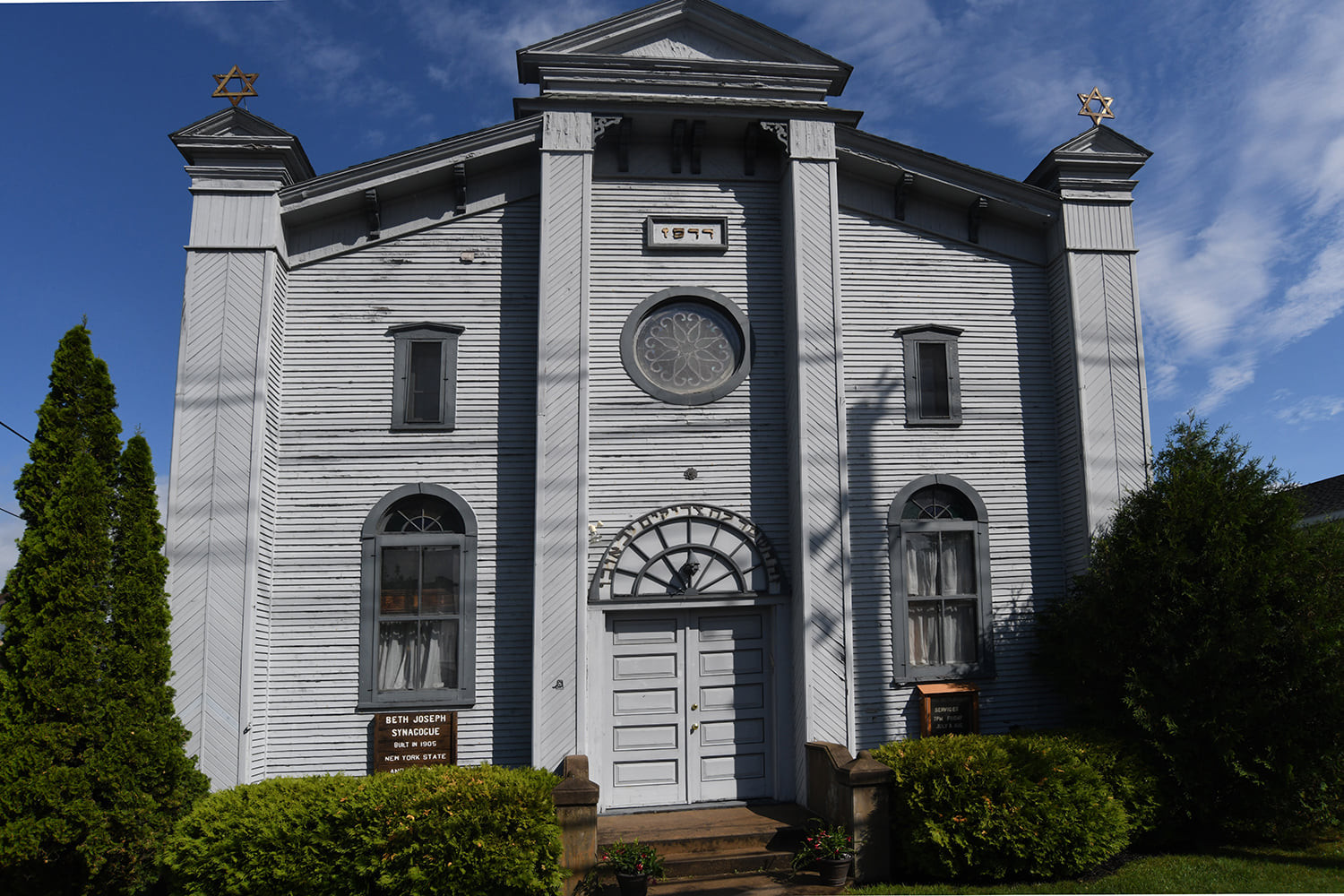 We all treasure places that have personal meaning to us: a childhood home, the spot where someone proposed, a site of a wonderful vacation. Perhaps it's a place where we have felt at home, loved, cherished, have laughed, teased a sibling, hugged our mother just for fun, or even cried. They are places we may never see again, or we may visit every week. We may talk about them to our friends, try to capture in words the feelings that that special place conjures up in our hearts. There are special places everywhere we look, because they're special to someone. In Tupper Lake, the special places are homes, restaurants where we've eaten with friends, trails we've walked with family, quiet places we've paddled and felt bliss. One particular building, one that represents hope, community, love, history, and so much more, is Beth Joseph Synagogue. It is a place of worship, a center of community, an architectural and historic treasure, a reminder of those long gone, and a place of comfort.

Tupper Lake has long been a welcoming home to immigrants, including those from Lebanon, Italy, and Québec. Many of the area's Jewish residents came to Tupper from Eastern Europe in the late 19th century, starting first in cities such as New York to create better lives for their families. Religious persecution was common in countries such as Lithuania and Russia, where Jews were not permitted to own land. One young man, Mose Ginsberg, arrived in the United States as a young boy. When his father died suddenly when Mose was a boy, Mose became a peddler in New York City to support his family, later moving upstate in search of better opportunities.

At the time, Tupper Lake was an ideal location for a peddler to sell his wares from a daunting 50-70 pound pack, thanks to the expansive lumber camps, mills, and other industries in the area. Mose was not the only peddler who thrived in the area. As Tupper Lake grew and the railroad was built, the number of Jewish families increased; for a time, religious services were conducted in private homes. Ginsberg would later recall that families would come from as far away as St. Regis Falls and Bloomingdale in order to meet the liturgically required number of 10 men at a service. The idea for a proper synagogue blossomed in this small, tightly-knit community.

Beth Joseph Synagogue was built in 1905, thanks to the efforts of the congregation. The synagogue is an architecturally stunning building, filled with finely-crafted woodwork, elegantly simple chandeliers, and radiant stained glass windows. Behind the bimah, or altar, a hand-embroidered curtain covers the ark, which holds the Torah scrolls used for worship. Floor to ceiling, the building feels warm and inviting, thanks to the gentle light and the richness of the wood paneling, all of which was done by hand.

Beth Joseph Synagogue was originally an Orthodox place of worship and it's design was meant to reflect the old synagogues of Eastern Europe, a reminder of a home left long ago. The balcony on the second floor once held the female members of the congregation, who prayed separately from the men; nowadays, it tends to be where the children sit, their whispers and giggles drifting downward. The building's unique design — particularly for the Adirondacks — means it has always stood out, a fact that was to come in very handy many decades later.

A place for family

In 1917, there were 28 families that made up the congregation, along with a few single men. As families blossomed, the congregation did, too. The founding families had children, and later grandchildren, who found Beth Joseph to be a kind of home. Jackie Kassel, a retired teacher who grew up down the street from the synagogue and who now lives part of the year in Syracuse, explains, "Growing up, that was our synagogue and it still is. That attachment is very much there for us," sharing that not only her children, but her grandchildren, are involved in the synagogue.

"We greet the new year (Rosh Hashanah) in Tupper Lake. It’s very special: to instill that in your family and have it continue."

At Beth Joseph, family isn't just about the people you're related to or share a home with; Jackie recalls her childhood, when overnight camps for children were much more prevalent in the area. Friday nights in summer would see Jewish campers from places like the scout camp at Massawepie celebrating the Sabbath alongside families from Tupper Lake. Girl Scout meetings were held in the social hall downstairs, along with a variety of dinners. From the very beginning, this has been a place of gathering and companionship.

A place of sanctuary and comfort

Buildings that have been around for some time aren’t just pieces of history themselves, they have borne witness to history, too. In September 1914, just a few months into World War I, the rabbi at the time read a special prayer, "...prepared by the chief rabbi of the United States, which was sent to every synagogue, praying for peace and good will among the warring nations of Europe.” Sadly, it would be several years before peace would arrive, the United States joining the war in the meantime.

Just a few years later, during World War II, Beth Joseph would welcome soldiers who may have been far from their homes and loved ones. In November of 1941, soldiers from the 51st Infantry at Pine Camp (now Fort Drum), were camped in Tupper Lake. Roughly 200 soldiers of a variety of faiths would go to Beth Joseph for a Sabbath service (the local paper justifiably reported the synagogue as packed), where they were warmly welcomed — and lavished with homemade treats after the service — by all of the congregation.

The rabbi at the time was a gentleman named Leopold Gutel, who had fled from his German homeland in 1934 to escape persecution by the Nazis. Quickly beloved by many in the Adirondacks, Rabbi Gutel would serve not just Tupper Lake, but also Saranac Lake and Lake Placid, as well as the Veterans' Hospital at Sunmount and Womens Army Corps trainees in Paul Smiths. He gave numerous interfaith lectures, talks, and sermons, throughout the Adirondacks and looked to the end of the war, when hate and prejudice could be stamped out, a topic he often spoke of.

Over the entrance to the synagogue, there is a phrase in Hebrew which reads, "This is the gate of the Lord; Blessed are those who enter." From campers to exiles, soldiers to children from the neighborhood, Beth Joseph has always welcomed everyone with kindness.

Times of quiet, then renewal

Like many other spiritual homes in small towns, the size of the congregation at Beth Joseph changed over the years. Services were held up into the 1960s, but eventually the synagogue was closed and closed it remained for roughly twenty years. By chance, a spark led to its renovation and refurbishment, a project the local community — of all faiths — eagerly dove into.

In the late 1980s, a tourist named Sharon Berzok happened to drive by and catch a glimpse of the synagogue's distinctive exterior. She asked around town and was directed to Esther Futterman, a longtime resident of the area and synagogue member. Like Mose Ginsberg, Esther's father had been a peddler, too, and she held a deep love for the synagogue, as did her entire family. This chance meeting led to a major project to reopen the synagogue, including a masterful renovation by local artisans, carpenters, and neighbors, including local inmates; fundraising; and the successful application to have the building named to both the state and National Historic Register of Buildings.

One of the greatest aspects of the renewal of Beth Joseph has been the creation of historic displays celebrating the history of the synagogue, the families long involved in its creation and growth, and artifacts of personal, community, and spiritual significance. Alongside vintage photographs of families like the Ginsbergs, Futtermans, Cohns, and so many more, visitors may view antique velvet Torah covers, delicately embroidered more than a century ago. There are photos of rabbis of the past, small treasures uncovered during the renovation, Yiddish cookbooks, Hebrew bibles with handcarved covers, yarmulkas sent by distant friends, and shofars, the rams horns which are blown during Yom Kippur services.

No less treasured are the framed photos depicting the renovation process: the restoration of the front steps, which was based on photos from 1915; the painstaking work to restore the embroidered curtain over the ark; a local man beaming over the new wooden arch over the door; and the women who made it happen: Esther Futterman, Muriel Ginsberg, Molly Sheren, and Janet Chapman. Each worked with dedication to see Beth Joseph come alive again, to make it possible for their grandchildren, and even later their great-grandchildren, to call Beth Joseph home, to make the sound of children's laughter ring out, to create a spiritual and emotional heart.

Work on the synagogue continues, with familiar faces and new ones joining together to celebrate this special place. A new kitchen was recently installed adjacent to the social hall, which has hosted art gallery exhibits and regular potluck dinners after Friday night services. Every Rosh Hoshanah, the congregation gathers here to ring in the New Year and Jackie Kassel or her sister Susi make their Aunt Rose's famous shortbread cookies. Laymen such as family members and summer residents conduct the services and the light of hope and a joyous community shines.

As Jackie Kassel notes, "Everyone who comes there knows that it's special. It’s the kind of place where on Friday nights there might be ten people, twenty people, there might be people in their dirty camp clothes, but they’re always welcomed."

To learn more about the history of Tupper Lake, be sure to visit the Tupper Lake History Museum, located in the old railroad depot. Enthusiastic readers should check with their local booksellers; we are partial to two books, Tupper Lake by Jon Kopp and "Mostly Spruce and Hemlock" by Louis Simmons.

Visit Tupper Lake this summer to find adventure, connect with family, and enjoy the Adirondacks under the stars.